Groin and anterior femoral pain is relatively common, especially amongst women, and can sometimes be debilitating. These symptoms are often wrongfully diagnosed as generalized diagnoses such as pelvic girdle syndrome, or as fibromyalgia. It can also be misdiagnosed as meralgia paresthetica, femoral or saphenous neuralgias. This article will detail an unknown but common musculoskeletal pathology that I have called pectineo-femoral pinch syndrome (PFPS), which often causes these exact symptoms. To the best of my knowledge, this condition has not been mentioned in the literature until our study (Larsen & Chieng 2019) included it briefly as a subcomponent of lumbosacral plexus entrapment syndrome, in 2019.

Pectineo-femoral pinch syndrome is a condition where the nerve bundle emerging from the femoral triangle (femoral, lateral femoral cutaneous, genitofemoral and ilioinguinal nerves), as well as the obturator nerves become positionally compressed by a combination of very tight upper adductor complexes (pectineus, add. brevis, add. longus), resulting in what often seems to be lumbar plexopathic pain due to its large potential area of affection, but is really caused by compression of the bundle of nerves in its periphery rather than at the site of the plexus. This holds especially true for patients where the symptoms are exclusively positional, ie., occurring during or after provocative hip flexion. 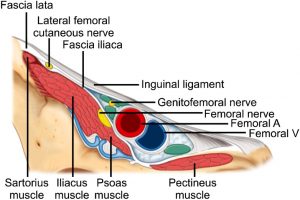 My first encounter with this problem was a patient with extreme femoral pain during squatting back in 2016. Most of the time, the symptoms occur after rather than during the provocative activity, making it much harder to detect its cause. In this case, however, it happened immediately during hip flexion. I treated her for lumbosacral plexus entrapment syndrome, which had helped her femoral pains that were induced by walking and running, but the squatting problem remained the same. After much back and forth and many trial and errors over the course of at least a year, I noticed how her squat-induced symptoms would ameliorate if we used a narrow stance, and conspicuously worsen with a wide stance. Similarly, she would also get worse with a deep- and better with a shallow squat. She would develop weakness in the quadriceps (L4 myotome) and adductor muscles (L3 myotome) after provocative activity. I had repeatedly been exploring the hip anatomy to try to figure out the cause of her symptoms, but as far as I could see, there was no obvious compressor of the femoral and related nerves emerging from the femoral triangle. When the patient noted improvement with a narrow stance, I figured it would have to be something with the adductors. A lot of back and forth resulted in a theory that the pectineus and upper adductor complex might lift and crush the femoral nerve and its companions into the inguinal ligament, only during hip flexion, and only in patients with very tight groins. 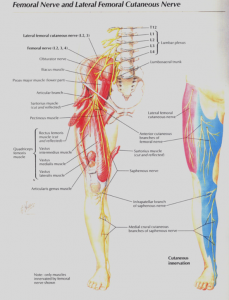 Because this is a positional compression of the nerves, it is not a mere irritation or myofascial entrapment neuropathy — It can exert a very strong compression on the nerve bundle, sometimes resulting in transient paresis of the quadriceps. I have seen grade 2 weakness in some of these patients, which is a weakness so strong that the patient cannot extend their knee against gravity (ie. cannot lift the weight of their own thigh), although this is less common. Both symptoms and weakness improve when the patient avoids excessive hip flexion. The definition of “excessive” varies from patient to patient, depending on the degree of groin tightness but also the degree of lumbosacral flexion. Lumbosacral flexion detauts the adductor complex during hip flexion.

The most common cause of the extreme groin tightness tends to be either hip impingement, hip osteoarthritis, or anxiety / PTSD / OCD. What all of these have in common is that the patient tends to clench their groins to stabilize either the hips or as a bracing maneuver to protect themselves. Sometimes this strategy is also seen in bedwetters or prolonged childhood bedwetters. It is also commonly seen in rape and sexual abuse victims.

Whether this problem also has the potential to compress the common femoral artery and vein is by me unknown, but plausible, and may be a cause of seemingly idiopathic thromboembolic development in these two vessels due to repeated mechanical insults, similar to that seen in costoclavicular syndrome (thoracic outlet syndrome) (Bushnell et al. 2009; Hussain et al. 2016).

The typical patient with pectineo-femoral syndrome will complain of severe pain in their groin or thigh, often in the zone of innervation either of the lateral femoral cutaneous, femoral, saphenous, genitofemoral, or obturator nerves. In simple words, anterolateral, anterior, groin or anteromedial thigh and leg. Testicular or anterior labial pain may also sometimes occur. They will generally report that their symptoms are much worse when sitting, but not all of them are able to detect that the degree of hip flexion is the most crucial variable for pain generation and intensity. The patient may enter your office limping due to the sometimes severe neurogenic weakness that PFPS induces. Sometimes, the patient (athlete) will be asymptomatic with regards to pain, but note weakness or lack of progress in their training (leg-/quadriceps dominant exercises). They may also note severe muscle soreness up to a week after training in the adductors of quadriceps that is misperceived as DOMS. In reality, these are neuropathic symptoms that will improve with a decrease in hip flexion. These patients may also be screened for PFPS.

Place the patient on the table and perform a spine, neurological exam of both lower extremities as well as a hip impingement examination of both hips. Hip impingement is a common finding in this patient group, often with very stiff FABER and abduction tests (suggesting posterior and lateral femoroacetabular arthritic lesions). Anterior femoroacetabular impingement (AFAI) may also be present. Have the patient bend their spines forward and backward to ensure that spinal flexion and extension do not induce L3 or L4 radiculopathy, nor great spinal pains. Perform strength tests for the lower extremities (L1-2 hip flexion, L3 adduction, L4 quadriceps, L5 foot dorsiflexion, S1 toe flexion, S2 hamstrings) — We are predominantly looking for weakness in the L3 and L4 myotomes. Weakness in other myotomes suggests other causes than PFPS. Sometimes, the patient will only demonstrate weakness after provocation, and a lot of strength may be necessary to break the patient’s quadriceps strength even when it is compromised, as it is a very large muscle group. A lumbar MRI should be done, to exclude L3 or L4 root stenosis, usually at the L2-3 or L3-4 lateral recess sites. This would rarely only affect the patient when they sit, but should be done nonetheless. Technically, other causes of neuropathies could also be excluded (MS, B12 deficiency, etc), but if the patient’s symptoms are solely triggered positionally, this strongly suggests a musculoskeletal origin of their symptoms.

Next, after having excluded a spinal cause of their symptoms, the most important provocation test is the Larsen squat test. If the patient had normal, or just slightly decreased L3 or L4 strength levels prior to provocation, make note of this. Have the patient squat down while slightly arching their low backs, while leaning into a wall. They should just be sitting down in a full squat (“relaxed”), not constantly clenching (fatiguing) their quadriceps. Stay there for two minutes. After this, immediately place them on the table and retest the adductors (L3) and quadriceps (L4) muscles on both sides. A positive test will demonstrate weakness greater than what was previously noted without provocation. It is best for a strong individual to perform this test, especially if the patient is a man. Grade four weakness (mild to moderate neural compromise) can be almost impossible to detect in the quadriceps if the patient is strong. Grade three weakness (paresis) will be easy to detect as it suggests severe neural compromise. Grade two weakness would be evident if the patient is not even able to extend their knee against gravity. As already insinuated, the more sinister the patient’s affliction is, the easier it is to detect it with the provocation test.

After confirming the weakness with positional compression of the femoral and obturator nerves, place the patient in a chair and have them lean well backward. Wait five minutes and redo the L3 and L4 tests. Decent strength should now be demonstrated, unless they were limping into your office in the first place, in which it may take a few weeks for full recovery of neural strength. Normalization of strength is usually seen, in compliant patients, within 4 weeks.

As should already be evident, the main treatment for pectineo-femoral pinch syndrome is to avoid excessive hip flexion. Generally, this will involve avoiding squatting and forward bending more than absolutely needed, and especially to avoid spending long durations in these positions. It will generally involve a sitting position that is leaning back to about 135 degrees. Rounding the back will help to detaut the groin, but will often result in low back pain. I, therefore, prefer to lean back (decrease degree of hip flexion) rather than rounding the back to stay more vertical.

Simultaneously, the patient may rehabilitate the underlying culprit of their problem. This will, initially, involve stretches for the upper groin muscles, or massage therapy. However, the massage therapist must pay special care not to massage and compress the femoral nerve in the femoral triangle. This can cause a dramatic worsening of symptoms. The stretches must not be done in 90 degrees of hip flexion, as this will worsen the compression. Approximately 135 degrees of hip flexion is suitable during the stretch, to target the upper adductor muscles. The knee should be bent during the stretching. Patients with underlying stress should become aware of their groin bracing habits and work on stopping this. Psychotherapy or anxiolytic drugs may be helpful in some circumstances. Patients with hip impingement may require a combination of cam or pincer surgeries or just conservative treatment (strengthening of the piriformis, gluteus medius, minimus and iliopsoas muscles). Patients with significant OA should undergo hip replacement, and strengthen the same muscles required in hip impingement cases.

It is possible to quickly recover from the symptoms associated with pectineo-femoral pinch syndrome. However, restoring normal hip flexion capacity without pinching the nerves is often a lengthy process, and patience will be required. With regards to pain, the prognosis is very good. Full range of motion, however, not always possible to reobtain. Improvements in hip flexion, however, is generally possible with a combination of the above-mentioned strategies.

Athletes with pectineo-femoral pinch syndrome should avoid full range-of-motion squats, and may benefit from rounding their backs slightly in the bottom (as long as it reverses on the way back up). A more narrow stance is favorable, presuming there is no significant anterior femoroacetabular impingement, in which we would have the dilemma between pest and cholera. Both of these corrections will generally enable greater squatting depth with less femoral nerve pinching.

9 thoughts on “Pectineo-femoral pinch syndrome: A common cause of groin & anterior thigh pain and weakness”